The third commitment in Our Common Agenda is about a new peace agenda – Promote Peace and Prevent Conflicts. This means reducing strategic risks such as nuclear weapons, cyber warfare and autonomous weapons. With something that sounds like advanced digital divination, international foresight must also be strengthened. In addition, a peaceful, secure and sustainable use of outer space must be ensured. This includes monitoring the Earth system from space to control carbon dioxide emissions.

Although this goal seems arranged for future threats from other solar systems, it is currently mostly about dealing with more immediate problems and the implementation of Agenda 2030 using the technologies of the fourth industrial revolution. This especially applies to space technologies.

Space assets have transformed the way we live and outer space systems are vital for understanding and solving global problems, such as implementation of the Sustainable Development Goals and climate action.

Antonio Guterres also advocates a global regulatory framework to coordinate space exploration and to prevent the armament of space. Therefore, a dialogue on outer space is proposed in connection with the planned Summit for the Future 2023.[1]

The United Nations Office for Outer Space Affairs (UNOOSA), which has been operating from Vienna since 1992 with the aim of promoting sustainable development, has outer space in its telescope. This includes keeping track of space debris and threats from terrestrial objects such as asteroids or solar storms.[2] One of the more odd goals is to also make space accessible to people with disabilities – The Parastronaut Project – which takes the inclusion of disadvantaged groups to completely new heights.[3] 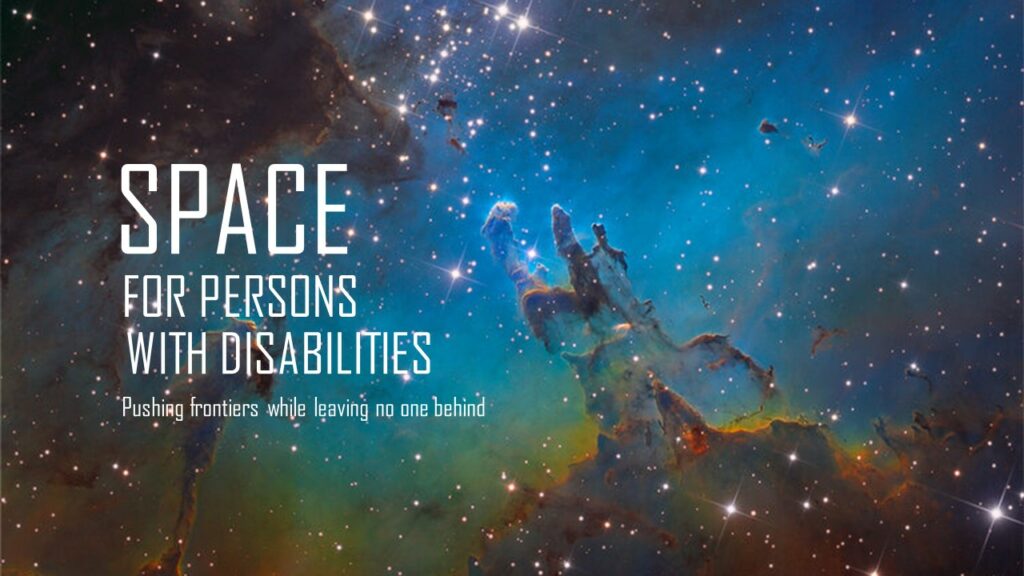 However, the central part of the sustainability agenda is being able to predict threats and risks through satellite monitoring and data collection. Space technology (such as satellites) is used to monitor the Earth system and for disaster management.[4]

UNOOSA operates the United Nations Platform for Space-based Information for Disaster Management and Emergency Response (UN-SPIDER) for this purpose.

According to UNOOSA, space technologies can also be used to support “good health and well-being” by using wearable monitoring devices, while electronic attendance monitoring can help promote “good education for all”. The technologies are also a central part of the operation of the “smart city” and can be used to “enforce legislation”.

This is also a priority for the World Economic Forum and their Global Future Council on Space, which includes UNOOSA’s director, astrophysicist Simonetta Di Pippo. As usual, the UN and the WEF have a very close cooperation.

One of the members is Ukrainian space lawyer and space environment activist Olga Stelmakh-Drescher. She is an advocate for private companies conducting research for space travel and to develop new technology (New Space).

In addition, Olga is the author of Space Sustainability Goals.[5] These include a form of Social Credit System for space activities (Space Sustainability Rating). This means a grading system that “should enable weighting critical for space sustainability characteristics and scoring the activities of space actors, particularly their impact on the sustainability of the space environment and efforts undertaken towards the minimization of a potentially caused environmental damage, which would consequently recognize and incentivize sustainably-positive behavior and development of technologies consistent with this purpose.”[6] 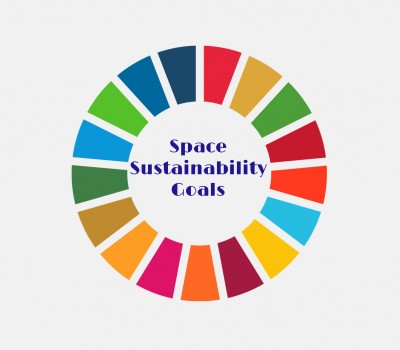 In 2019, Olga participated in the “Noosphere Space Summit”  in Ukraine, where talks were held about the Fourth Industrial Revolution and a new space race.[7]

The largest operator in terms of placing satellites around the globe is Tesla billionaire Elon Musk’s SpaceX, which through its SpaceLink system, is intended to give the whole world Internet access – an important goal for the UN and the WEF. As much as 22% of all satellites in space are currently controlled by SpaceX.[8]

The master of contradictions, Elon Musk (Young Global Leader  2008), also has plans to build a “back-up civilization” on Mars in preparation for what he describes as a largely inevitable Third World War.[9] As early as 2019, he expected spaceX travel between Earth and Mars. However, this has been postponed several times (plans are now set for 2029).

The second largest satellite operator Planet Labs is led by Will Marshall who is also a Young Global Leader and a member of the Global Future Council on Space Technologies.

Planet is driven by a mission to image all of Earth’s landmass every day, and make global change visible, accessible and actionable.

Planet Labs works closely with the United Nations and its partners to use satellite data to achieve global goals. The collaboration includes Carbon Mapper, which receives its policy from the Rocky Mountain Institute, led by Jules Kortenhorst (see previous post), the UN and the oil company Chevron, and is funded by climate philanthropists such as Bloomberg, the High Tide Foundation and the Grantham Foundation.[10]

Carbon Mapper is deploying a multi-scale emissions monitoring system from air and space. We’re currently building two demonstration satellites that will launch in early 2023 and plan to expand to a fully operational constellation of many satellites by 2025.

Another partner with a similar approach is WEF board member Al Gore’s Climate Trace project, which uses AI and machine learning to analyze data from more than 300 satellites and 11,000 sensors. This is primarily about detecting methane leakage in the oil and gas industry, mapping biodiversity and changes in coral reefs. But according to the WEF, surveillance may soon go further. As the Global Future Council on Space writes in its report Space for Net Zero (2021):

Communications satellites can help to actively monitor and reduce emissions by allowing real-time access for numerous business and consumer IoT applications for the purposes of increasing operational efficiency and minimizing energy and fuel consumption.

This sounds very much like the futuristic fantasies of H.G. Wells, Oliver Reiser, and Pierre Teilhard de Chardin envisioning a Command Central that would manage and control both the Earth system and all human activities – a World Brain.

This proposed satellite temple is the vision that man has to visualize. It will not be based on the surface of the earth. It will be a temple in heaven… (Oliver Reiser) 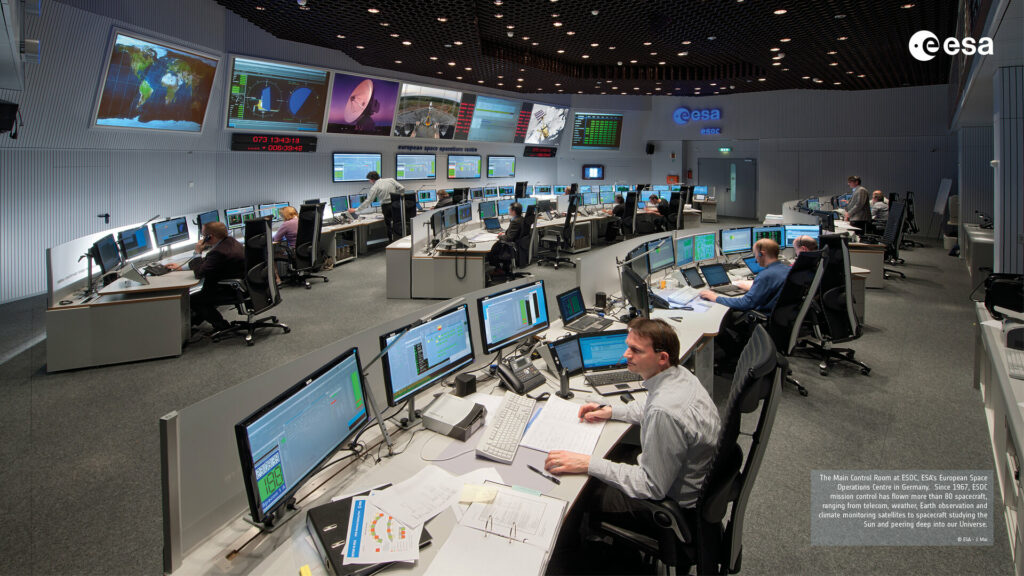 To better coordinate and streamline this data collection, a global network of “Earth Operations Centers” is now proposed that will “utilize data, expertise and capacity, and ultimately help succeed in meeting the challenge of climate change”.[11]

To successfully manage and coordinate the netzero efforts on “spaceship Earth”, the time has come to build a sort of distributed operations centre to help manage our “spaceship”.

The question, however, is how much energy it takes to create and maintain a watchful AI eye from space? From Wikipedia:

Heavy rocket for instance burns through 400 metric tons of kerosene and emits more carbon dioxide in a few minutes than an average car would in more than two centuries.

This is fourth article in the 13-part series about the 12 commitments in Our Common Agenda. See also:

[7] The term “noosphere” (thought sphere) was first used by Russian-Ukrainian mineralogist Vladimir Vernadsky (who also founded the Ukrainian Academy of Sciences) and refers to the theory of a third phase in the Earth’s evolution after the geosphere and biosphere. This refers to the stage when humanity assumes control of the evolution on Earth and creates resources through transmutation. The term noosphere was simultaneously popularised by paleontologist and theologian Pierre Teilhard de Chardin.