In Our Common Agenda, UN Secretary-General Antonio Guterres wants to achieve gender equality in all areas, including decision-making, through quotas and special measures. Women entrepreneurs should be encouraged and young women’s voices should be heard more. In addition, an emergency action plan is to accelerate the eradication of violence against women and girls. This includes a global campaign to eliminate all social norms that tolerate violence against women. This is also linked to the UN’s sustainability goal 5 – achieving gender equality and the empowerment of all women and girls. In this work, AI and digitalisation play a crucial role. The women must be kept under the watchful eye of the AI ​​god.

Women are gaining more and more prominent positions in the global game and the implementation of the digital transformation. As United Nations Deputy Secretary-General Amina J. Mohammed declared during the pandemic:

It is time for us to rise as women leaders taking action to conquer the pandemic and come out stronger.

As a good example, Norway’s former Prime Minister Erna Solberg was presented. She was previously Co-Chair of the UN Secretary General’s Advocacy group for the Sustainable Development Goals. The UN initiative Women Rise For All united women leaders, including Solberg, from around the world with the mission to stop the pandemic and “build back better”.

We are women leaders rising in solidarity to save lives and protect livelihoods. We call for all leaders in all countries and in all sectors to meet the human crisis of COVID-19. Stopping this pandemic and recovering from it is a shared responsibility requiring global solidarity. We must recover better. And we can, by building back better together. Together we are stronger when Women Rise for All.

This was also intended to give rise to a more sustainable, equal and carbon-neutral world. Among the women who called for global solidarity were Melinda Gates, the Danish Prime Minister Mette Fredriksen and the previously mentioned Amina Mohammed. United Nations intends to build on this work.

At the UN, women-related issues of gender equality and empowerment are pursued in UN Women A sub-body that was founded in 2010. Sweden is the single largest contributor together with countries such as Finland, Norway, Canada, Australia, Germany, Japan, Switzerland and the USA.

These partners are recurring names in the UN’s work on Our Common Agenda and point to Western dominance. It also means that it is mostly a Western perspective on women’s issues.

In 2021, UN Women released The Global Acceleration Plan, which states that COVID-19 has worsened the situation for women worldwide. This plan promises to remedy this. The report points out six key points that must be counteracted or strengthened.

How then should these issues be solved?

The core principles of the report are about intersectionality, feminist leadership, and the implementation of the Great Transformation. This means the creation of “Generation Equality Action Coalitions”. That is, multi-actor networks that will act as catalysts for collective action. The language is anything but softly feminine. Instead it rather gives the feeling of a military operation. 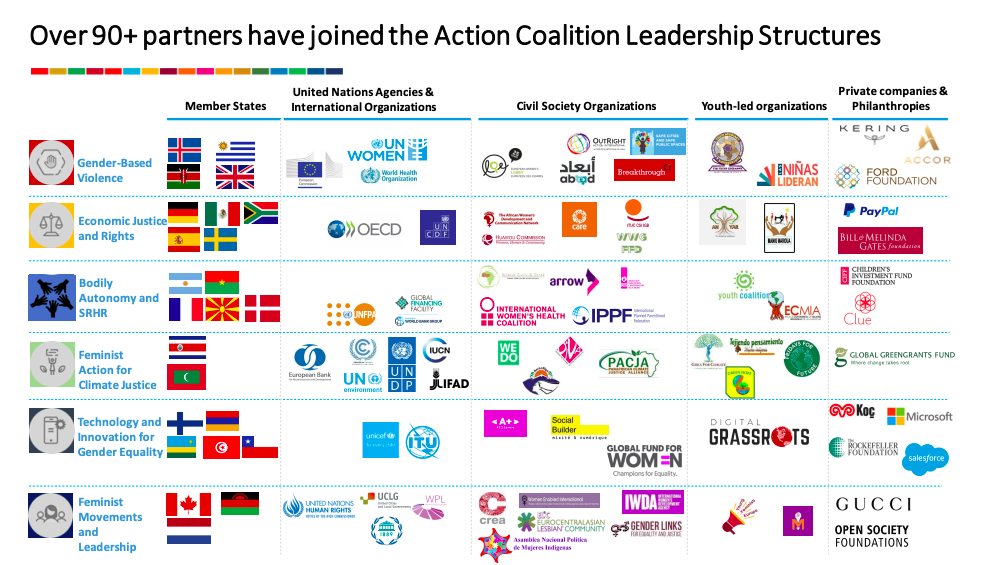 These are the agents which have taken upon themselves to determine the direction of the global movement towards goals they themselves have set. This approach (previously called “Transition Governance”, developed for the Dutch Government in the early 2000s) is described in my dissertation Ordo Ab Chao – The Political History of Biofuels in the European Union (2012). Klaus Schwab of the World Economic Forum now calls it “Stakeholder Capitalism”.

It is therefore hardly surprising to find the major foundations and corporations core issues represented. They belong to their agendas. In addition to Climate, Leadership and Reproduction, we find Digitalisation as a foundation for building a “just and gender-neutral society”.

In the subgroup “Technology & Innovation for Gender Equality”, with Rockefeller Foundation, Salesforce, and Microsoft as partners, this is a top priority. The group presented a Gender-Diverse Digital Reset in Davos at the WEF’s digital meeting in January 2021. While the pandemic exacerbated the situation and, according to the WEF, “extended the gender gap by a generation”, it also opened up for “catalytic opportunities”.

This displays a schizophrenic attitude where every catastrophic crisis is simultaneously seen as a fantastic opportunity – especially for those who invest in and deliver the solutions. In this case, it is GenderTech or FemTech that will come to the rescue. Women and girls should be encouraged to use more digital solutions to achieve a more “inclusive” digital transformation. Data collection, analysis, and control are the cornerstones of the new system.

Shaping the Future of Gender

Everything is based on numbers and statistics. The technocratic thinking where everything should be exactly equal and divided into 50/50 in all sectors of society, does not take into account what people actually want to work with or that the best qualified should get the job.

Instead, perfection must be achieved through special measures and quotas overseen by technocratic control systems.

As usual, the close UN partner World Economic Forum is ready to assist, with their ”Gender Parity Accelerators” , which will, among other things, anchor “gender equality in covid-19 response and recovery policy”. These compare data from all nations of the world and rank each country according to how close they are to a perfectly 50/50 gender division in a variety of sectors.

The project is subordinate to WEF’s Center for the New Economy and Society with members such as the Bill & Melinda Gates Foundation, Microsoft and Salesforce. WEF’s expert network reviews the forum’s equality issues in collaboration with UN Women. This is where partnerships are formed.

Gender equality has also been a focus of WEF’s system initiative “Shaping the Future of Education, Gender and Work”. In the working group on gender, we find representatives from the Bill & Melinda Gates Foundation, Salesforce, Unilever and companies in industries such as health, pharmaceuticals, telecommunications, security and advertising.

One of the points raised by their report Accelerating Gender Parity in the Fourth Industrial Revolution is to get more women into leading positions. For example, in governments and large companies. In the report, WEF highlights Canada and France, led by WEF puppets Trudeau and Macron, as good examples.

Prime Minister Justin Trudeau in Canada and President Emmanuel Macron in France have recently achieved gender parity in their cabinets of Ministers, as have a select number of other countries in the last decade.

Through this, WEF has ensured that it gets its own well-programmed women into key positions. That is, those who have undergone their various leadership programs (such as Young Global Leaders and Global Shapers). This gives the forum greater control over the agenda and can steer it in the desired direction.

In recent years, a large number of women have been given leading positions in the implementation of both the great digital transformation and the fight against COVID-19. According to the UN Bureau of Statistics, these women have had a major impact on a successful pandemic fight.

In countries with women at the helm, confirmed deaths from COVID-19 have been six times lower, for example, due in part to faster leadership response and a greater emphasis on social and environmental well-being. (Progress on the Sustainable Development Goals – The Gender Snapshot 2020)

This may also be related to the fact that women in general are often more accommodating and more prone to respond on a more emotional level to threats such as pandemics, climate changes, and war. At the same time, this means that they don’t ask difficult questions and can more easily be persuaded to take drastic measures (such as shutting down whole communities in order to save lives). Perhaps they can also be more easily duped by the technocrats’ exaggerated models? As Norway’s former Prime Minister Erna Solberg declared in connection with the pandemic:

The corona virus knows no borders. … This pandemic requires urgent efforts in the spirit of multilateralism: a united global response with the United Nations at its core. In our global village, solidarity is the only option …

But on the other hand, the same type of mantra has been repeated by the world’s male leaders.

As the Corona virus has shown, there are no borders. It does not discriminate. It’s mean. It’s nasty. But we must all deal with it together. (Donald Trump)

UN Deputy Secretary-General Amina Mohammed has been a member of the Young Global Leaders Board since 2017, along with Nicole Schwab, chairwoman (the board also includes Eric Jing of ANT Group, which developed the Chinese social credit system). YGL’s work is then led by the executive director Mariah Levin. Mohammed, who was previously Minister of the Environment in Nigeria, gained her top position in the UN the same year she was elected to the Board. She had previously been responsible for the process that led to the global goals. She exemplifies the close ties between the UN and the WEF.

In addition to the fact that the management of YGL is dominated by women, a number of female leaders have participated in the forum’s program. Half of the annually elected leaders from YGL are women. These have taken central positions during the pandemic and the subsequent major recovery. Mariah Levin sees female leadership as crucial to dealing with major crises such as pandemics and the climate. Among women with their loyalty to WEF who have gained top positions in politics, we find names like Chrystia Freeland, Jacinda Ardern, Sanna Marin, Paula Ingabire and Annalena Baerbock. 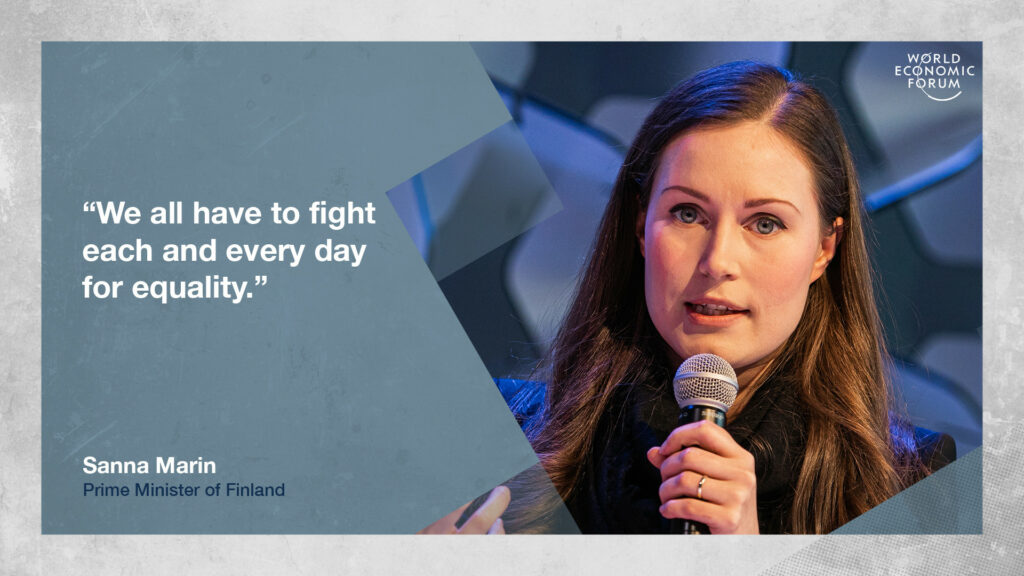 The type of solutions that WEF rewards to strengthen the position of women is shown in the report Unlocking Technology for the Global Goals, where the Fourth Industrial Revolution as usual is in focus. Although five of the six main authors are women, it is more masculine-oriented technocratic methods that are advocated. Some of the proposals for achieving a more equal society are:

Women’s safety must be guaranteed by being included in an AI panopticon where their activities and contacts are studied and analyzed. Traditionally human judgments do not bother as these risk being biased. Instead, decisions should be left to machine intelligence. By linking technology with the UN’s humanitarian objectives, it is nevertheless intended to promote the positive aspects of the Fourth Industrial Revolution. As WEF chairman Klaus Schwab wrote in Foreign Affairs 2015:

We should thus grasp the opportunity and power we have to shape the Fourth Industrial Revolution and direct it toward a future that reflects our common objectives and values.

The question, however, is whose goals and values ​​will ultimately be promoted? The UNESCO report The Effects of AI on the Working lives of Women presents a study showing that women are less likely than men to accept being monitored in their workplaces. However, this has not prevented an explosive development in connection with the pandemic where the technologies have also entered homes. This includes monitoring phone logs, recorded calls, email conversations, face recognition, closed-circuit television cameras, baby monitors, and portable devices to measure biological human activity.

In order to minimise injustice and achieve a perfect balance, the United Nations and their partner the World Economic Forum want to create a society with extensive technological supervision and control. This risks quickly degenerating into a dystopian nightmare and becomes anything but a world ruled by classically feminine ideals. Was this what was meant by “successfully fighting the pandemic with female leaders” at the helm?

In the next post, I will address commitment number 6. Build Trust in Our Common Agenda.